SHOWROOM UPDATE: For the safety of our staff and customers, our showroom will open by appointment only.
« Back to All Press

“Highest in Customer Satisfaction with Windows and Doors, Two Years in a Row” 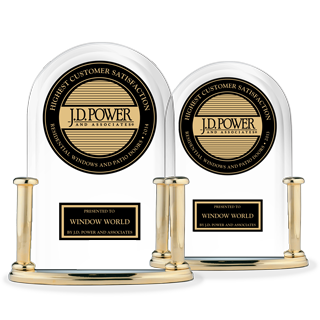 NORTH WILKESBORO, N.C. (July 14, 2014) — Window World®, America’s largest replacement window and home remodeling company, has received the ranking of “Highest in Customer Satisfaction with Windows and Doors” from J.D. Power for the second consecutive year. These findings are the result of the 2014 Windows and Patio Doors Satisfaction StudySM, released earlier this week.

The study results are based on feedback from more than 2,300 customers who purchased windows or patio doors in the previous 12 months. Window World scored 806 points out of a possible 1,000, a five point improvement over its rating in 2013. This number represents overall performance based on five factors: appearance and design features; operational performance and durability; ordering and delivery; price paid for products and services received; and warranty.

This latest recognition enhances a growing collection of accolades for Window World, including earning the Good Housekeeping Seal six years in a row, ranking the No. 1 Window Company in Qualified Remodeler magazine’s Top 500 for seven consecutive years, and named No. 1 Replacement Contractor by Remodeling Magazine in its Top 550 rankings for five years. Window World was also named to Remodeling Magazine’s Big 50 Class of 2014, distinguishing it as one of the top remodeling and home improvement contracting companies for customer service, construction expertise and management innovation and excellence.

Window World®, headquartered in North Wilkesboro, N.C., is America’s largest replacement window and home remodeling company with more than 200 locally owned and operated offices nationwide. Founded in 1995, the company sells and installs windows, siding, doors and other exterior products. Window World is an ENERGY STAR® partner and its window products have earned the Good Housekeeping Seal for six consecutive years. 2014 marks the second consecutive year Window World has been ranked “Highest in Overall Customer Satisfaction with Windows and Patio Doors” by J.D. Power. Additionally, through its charitable foundation Window World Cares®, the Window World family provides funding for St. Jude Children’s Research Hospital®, where it was named New Corporate Partner of the Year in 2010. Since its inception in 2008, the foundation has raised over $4 million for St. Jude. Window World, Inc. also supports the Veterans Airlift Command, a non-profit organization that facilitates free air transportation to wounded veterans and their families.

Window World received the highest numerical score among window and door manufacturers in the proprietary J.D. Power 2013-2014 Windows and Patio Doors Satisfaction StudySM, tied in 2013. 2014 study based on responses from 2,374 consumers measuring 11 brands and measures opinions of consumers who purchased new windows or patio doors in the previous 12 months. Proprietary study results are based on experiences and perceptions of consumers surveyed in January – April 2014. Your experiences may vary. Visit www.jdpower.com.

« Back to All Press

Get A Free Quote